Hello! It's been about a week since I first wrote about working on HookWeb Reducer. I'm on vacation from work and have some time to invest in this, and a lot has changed. I'm getting closer and closer to shipping an MVP. That's the next milestone. The vision is also sharpening.

Something about HookReducer wasn't sitting quite right with me. I loved that I got the .com, and what I'm building is well suited to webhooks. But it's not just for webhooks. It's really for any kind of message. Initially, I'm only accepting messages via HTTP (and it could stay that way forever). But the client doesn't have to be a webhook provider.

WebReducer.dev struck me as a better name. It's still easy to spell and say. I think it's memorable. The .dev TLD is generally less desirable than .com, but in this case, it immediately tells you that the product is a service for software development. HookReducer.com could be selling something to hang curtains, a sewing tool, etc, etc.

I've decided to open source this project now, even though it's nowhere near feature-complete. I always intended to build an open product. I imagined features that would allow users to leave anytime they want, with their data and their code, and run on their own infrastructure. I was also leaning towards open sourcing everything. Once I made this decision to do it, I wondered when was the right time. I was a little bit fearful that someone would look at my code and judge me. Why did I use x-library? Why don't I use Y Design pattern there?

I've reflected a little bit and gotten over these fears

So, I've made the repo public as of now.

I've made some progress on value prop. I think I can articulate some use cases more clearly than I could last week. A point of emphasis: this is a µ-product. It's designed for µ-problems, of which there are many. Here are some I've thought of.

On the engineering front, I've made the most progress. I've added many security measures for the code runner.

The system is designed with two priorities

To achieve this, I make heavy use of queueing and isolate the hell out of the VM that runs user-generated code. I took some inspiration from Tim Nolet's post.

When requests hit WebReducer, they are put directly into a bull queue. The only thing that happens before that is body parsing. If we see a surge in traffic, the database won't be the point of failure. These enqueued jobs are processed with a reasonably high concurrency. The initial processing doesn't run the code, it just captures the request in postgres and enqueues the next job to run the code.

The launcher queue has a concurrency of 1. It's very important that two launchers are not run at the same time because they would run into a race condition. Whoever saves the state last would win. You might note that a concurrency of 1 is not scalable. To solve this, I've created a series of N launcher queues. When a job is enqueued, it is assigned to one of them by a hash of endpoint key. Individual endpoints process requests serially, but the system processes requests in parallel.

The runner itself is stateless. I can create as many instances as I want if it ever becomes the bottleneck.

One of the best features of WebReducer is going to be recomputing your state when you change the code. But, if you've received 1M events, it doesn't make sense to enqueue 1M jobs in the queue and hit the runner 1M times. I've built the system to be capable of batching requests. This could come in handy at some point for high-volume endpoints, but for now, I'm only conceiving of it for replaying state.

I realized that in my initial design prototype, there was a whole column in the requests table that was often displaying the exact same data: 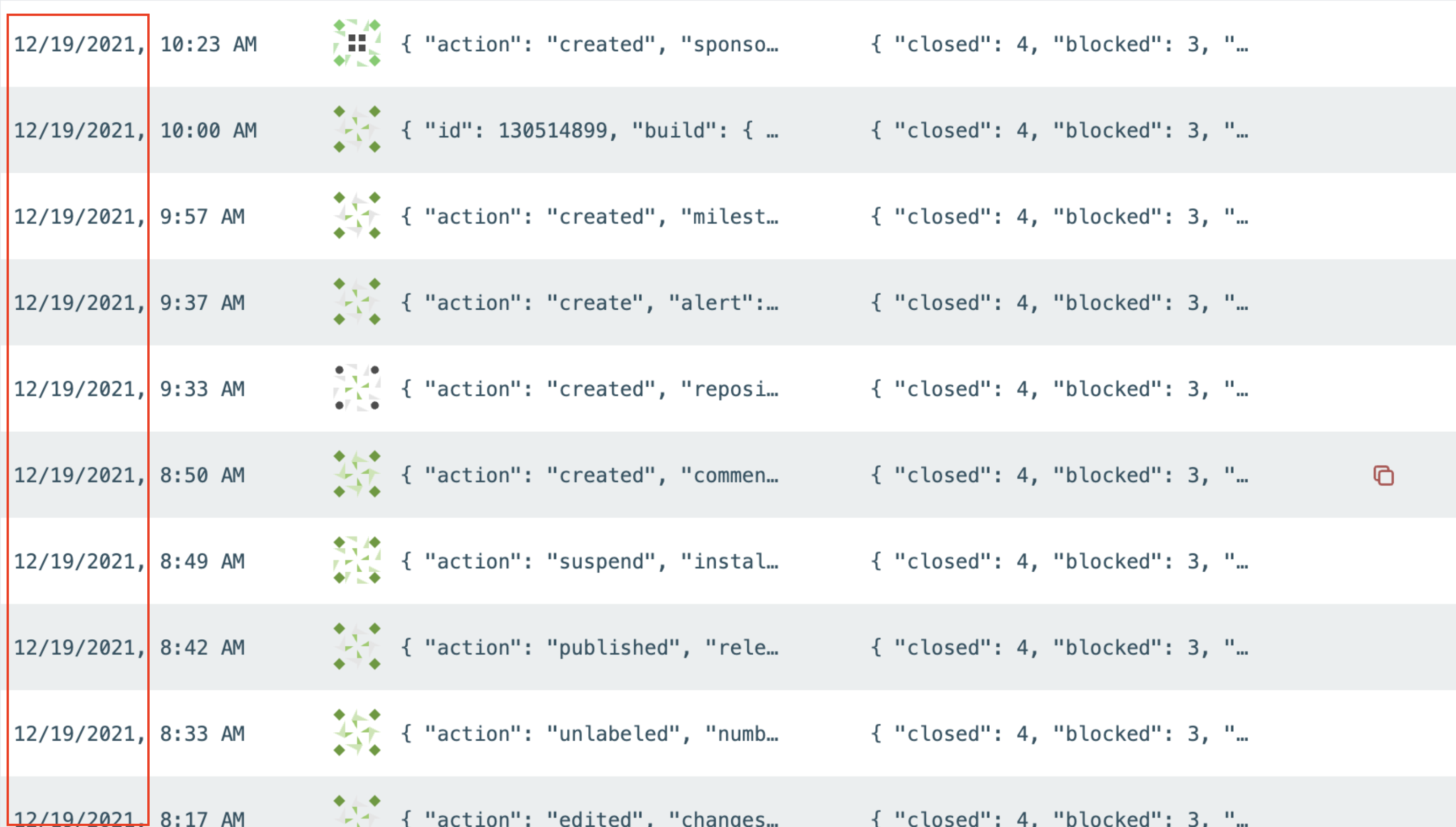 So I added a line in the table representing the date change. Here's how I made the date line. Whoever thought of position: sticky deserves a medal.

I realized that modals are going to be an important UI element, so I setup a system I'm pretty happy with. 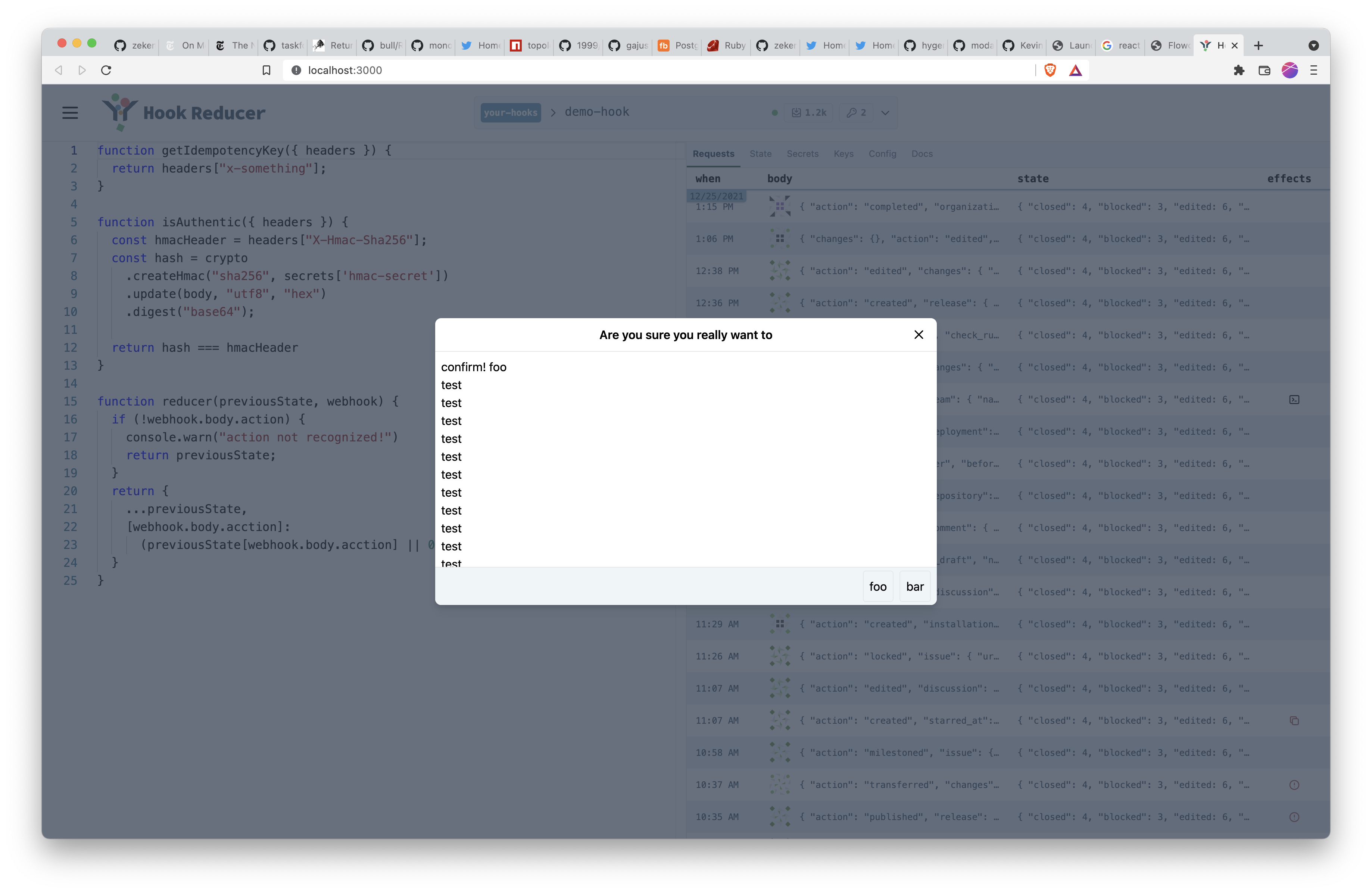 When you want to open an existing component in a react component, here's how you would do that

To create a new modal:

Features of this system: